Frisia has been making life

We’re proud of our history. We have been making candy that cheers people up for over 120 years. That’s how it was back in the late nineteenth and early twentieth centuries when our products were sold at the funfairs of Friesland in the Netherlands and it’s still like that today.
Shall we go back in time?

From small to big

Brothers Sybren and Petrus Bouritius began making confectionery in a private house in Harlingen in 1899. At the time they made nougat and candy canes. They sold their wares mainly to funfair operators and the brothers’ tasty treats soon became very popular. In 1927, the De Jong family took over the company. Harmen de Jong and his sons Klaas, Hennie and Marten developed the firm into one of the biggest confectionery factories in the northern Netherlands.

Straight after the Second World War, Frisia quickly revived. In 1949, the company had 140 employees. Frisia exported products to various countries in Europe, Africa and the Middle East. Nougat, candy canes and lollies were popular everywhere, but tubes of acid drops in particular became an international best seller.

1967 was a special year for Frisia. The company came into contact with J. Berends, a contractor whose hobby was making confectionery. One thing led to another and director Harry de Jong (Harmen’s grandson) asked Berends to make mallows. After a short start-up period, in 1968 Frisia started producing mallows: diamond-shaped and yellow and pink in colour. Success came quickly. As of 1970, Germany, too, fell for the soft-sweet temptation.

For years, mallow production and sales fluctuated considerably. Good years alternated with less positive periods. In 1975, Smilde BV took over Frisia. That led to a quality boost and modernisation. Market trends were followed more efficiently and the focus was placed more and more on mallows and less on ‘hard confectionery’.

The next owner was Faam BV, in 1988. Faam from Breda made liquorice, wine gums and peppermints and was a subsidiary of the English firm, Bassett’s. A year later, Bassett’s was taken over by another English company, Cadbury Schweppes, giving rise to Cadbury-Faam. As of 1991, Frisia focused exclusively on mallows.

Frisia has always been a popular company. In 1999, when it celebrated its centenary, the Belgian company Astra Sweets took over Cadbury-Faam, including Frisia. The production sites were taken under the wings of Astra Sweets while the sales department remained with Cadbury Faam. From 1999, the production capacity increased and further automation was introduced. 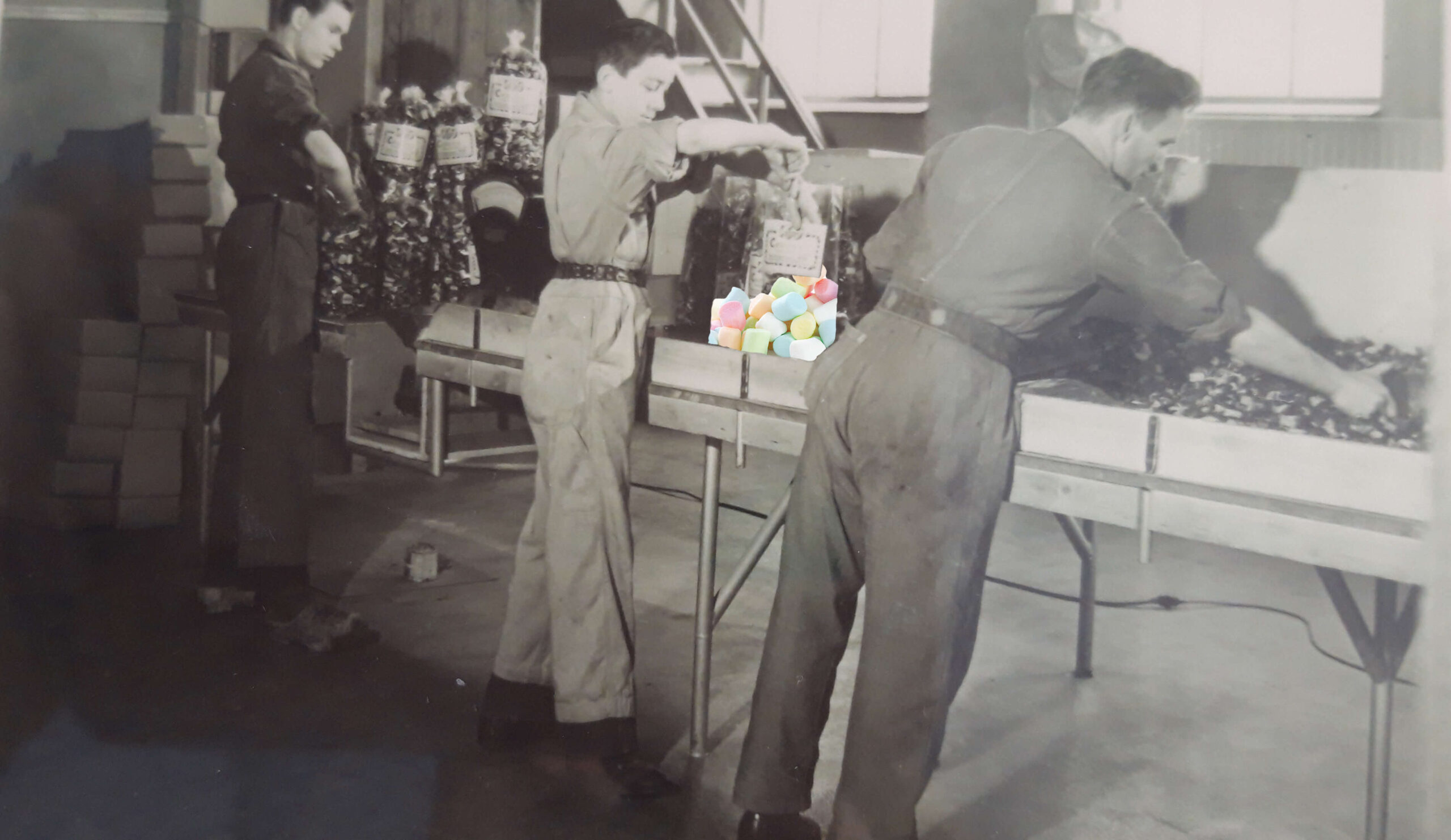 Product development has always been important and the new millennium has seen the introduction of St. Valentine’s mallows, winter mallows, Halloween mallows and Easter mallows, among other things. Other mallows and UFOs were added to the assortment later on. Frisia is strengthening its position as an A brand and market leader. To maintain and further expand this position, product development remains an ongoing process. Today and tomorrow, that remains a priority at Frisia.